Diversification of the VVER fuel market

The supply of electricity in several of the Eastern European countries is highly dependent on the operation of their nuclear fleet, which entirely comprises VVER-440 and VVER-1000 units. Following the political conflicts in Ukraine, including the Russian annexation of Crimea, the governments in these countries have become increasingly concerned about secure supply of VVER fuel.

Westinghouse Electric Company LLC is today the only alternative supplier of VVER fuel, and was recently awarded an extended contract to supply VVER-1000 fuel to several of the 13 units of this type in Ukraine. In this article, the journey towards the contract will be presented, focusing on the performance of the Westinghouse fuel design and the technical challenges encountered and resolved along the way.

Westinghouse is also actively supporting the VVER-440 units in the European Union (EU). In May 2015, a Westinghouse-led consortium with nine partners in different countries was awarded funding from the European Atomic Energy Community (Euratom) for a programme that will allow important steps toward diversification of the VVER-440 fuel market.

There are 33 VVER units operating in the EU and Ukraine, either of VVER-440 or VVER-1000 design. Both types use hexagonal fuel, but the VVER-440 fuel design is considerably smaller and contains much fewer fuel rods. Additionally, while the VVER-1000 design uses regular rod cluster control assemblies (RCCAs) to control reactivity, in VVER-440 cores this is achieved by inserting or withdrawing control fuel assemblies (“followers”) in certain positions of the core.

All of the nuclear power plants in Ukraine are operated by the government-owned National Nuclear Energy Company (NNEGC) Energoatom, which has headquarters in Kiev.

The development of the first Westinghouse VVER-1000 fuel design for delivery to Ukraine started in 2001, as a result of a governmental agreement between the Ukraine and the USA on energy cooperation and security. The work was performed under the Ukraine Nuclear Fuel Qualification Programme (UNFQP).

Westinghouse had earlier designed and delivered VVER fuel to the Temelín nuclear power station in the Czech Republic, but without having to consider mixed core conditions. Developing VVER-1000 fuel for mixed cores presented an additional challenge, especially since compatibility data on the resident fuel was not easily accessible to Westinghouse.

After completing the VVER-1000 fuel development project, which was strongly supported by the Pacific Northwest National Laboratory (PNNL), six lead test assemblies (LTAs) were manufactured in Westinghouse’s fuel fabrication facility in Columbia, South Carolina, USA. Westinghouse shipped the fuel in 2005 and it was loaded in South Ukraine 3 the same year.

The LTAs were discharged in 2010 after completing four cycles of operation as planned. Detailed examinations of the fuel (including visual appearance, corrosion, straightness, growth, and grid positions) were performed after each cycle and it was concluded that the Westinghouse LTA fuel performed as anticipated.

Before following up the LTA programme with fuel delivery of reload (or batch) quantities, Westinghouse took the opportunity to enhance the LTA design, strengthening the structural stiffness by adding a second bulge attachment at each grid location (see Figure 1). The fuel design for the reload, referred to as the Westinghouse Fuel Assembly (WFA) design, also included changes to the material in 13 of the 16 grids to reduce parasitic neutron absorption, thereby reducing the fuel cycle cost. 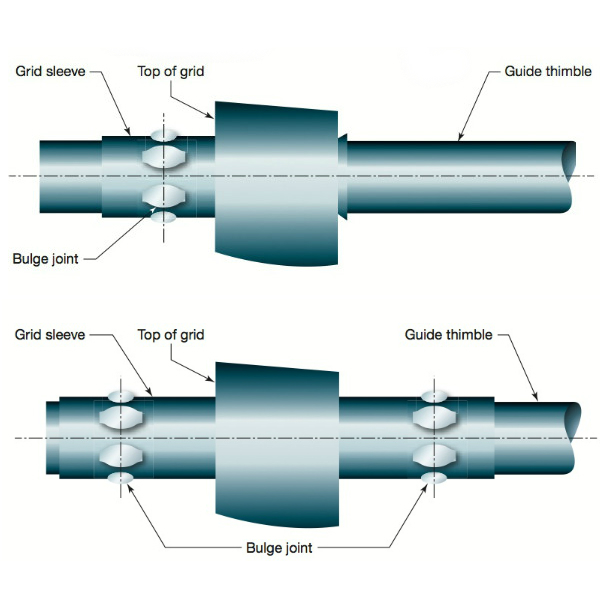 To supply the quantity of fuel assemblies needed for actual reloads in the reactor units, manufacturing was relocated to Westinghouse’s facility in Västerås, Sweden. In 2009, Westinghouse fabricated 42 assemblies here that were subsequently loaded in South Ukraine 3 in early 2010. This effort was performed under the UNFQP. The following year, 2011, another full batch (42 WFAs) for reload was inserted in South Ukraine 3 and the same number of fresh assemblies were also inserted in the plant’s second unit.

In addition to the fuel hardware, Westinghouse has received the go-ahead from Energoatom to deliver its core supervision system, Beacon®, which also is in operation at Temelín. The system has been used at South Ukraine 3 to ensure accurate modelling of mixed core conditions, and to enhance the level of support to the reactor operator during transients.

In 2012, several Westinghouse assemblies in both South Ukraine units showed mechanical scratches and rub marks, and even damage of the grids during the reload shuffling. The grids had been damaged by mechanical interference with the reference fuel and by high lateral loads that exceeded the strength limits.

In contrast to other pressurised water reactor fuel geometry, which uses a square lattice, the hexagonal-lattice VVER-1000 core is more exposed to mechanical contact between the fuel assemblies, particularly if the surrounding assemblies are distorted (see Figure 2). In the actual cores, the Westinghouse fuel assemblies were surrounded by co-resident competitor fuel assemblies with a significant amount of distortion and a high level of structural stiffness. If a fuel assembly is pushed into (or pulled out of) position under such circumstances, it could cause mechanical interference with increased risk of damage to the grids. It should be noted, however, that none of the fuel rods’ integrity was affected. 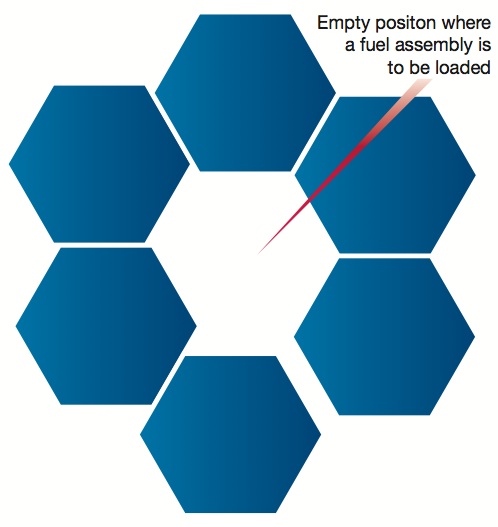 As a consequence, several assemblies with potential damage were unloaded to the spent fuel pool; after further inspection, it was concluded that most of these could be used as-is, while some had to be repaired. However, the State Nuclear Regulatory Inspectorate of Ukraine (SNRIU) did not approve loading of any more fresh Westinghouse fuel assemblies of this design.

To resolve the issue, Westinghouse initiated two programmes: an optimisation of the core loading sequence and modifications to the fuel design to reduce the risk of damage due to mechanical interference.

The different types of fuel assembly-to-fuel assembly loading scenarios were ranked based on risk of interference, and the ranking was then used to optimise the loading sequence. Westinghouse also used a core loading sequence beginning from the centre of the core and stabilised the loading with a three-legged bridge from the core centre out to the shroud. Devices to aid the loading, such as smooth-sided dummies and top nozzle loading guides, were also developed to help open up the target core locations.

The measures taken have proven to be very effective, and since the 2012 outages, the lateral forces during the reloading of the cores have been limited and there has been no case of mechanical damage of the fuel assembly grids. The optimised sequence also saves considerable time in loading the assemblies.

Several enhancements to the WFA design were made to increase the lateral grid strength and to minimise the risk of harmful mechanical interaction between assemblies.

The outer strap of the spacer grids was made thicker and completely from Alloy 718, inner straps were added and the profile was modified to reduce the risk of interference with adjacent resident fuel. Chamfers and radii were added on the bottom nozzle, and side plates on the top nozzle, to better facilitate the fuel assembly loading. (See Figures 3-6). 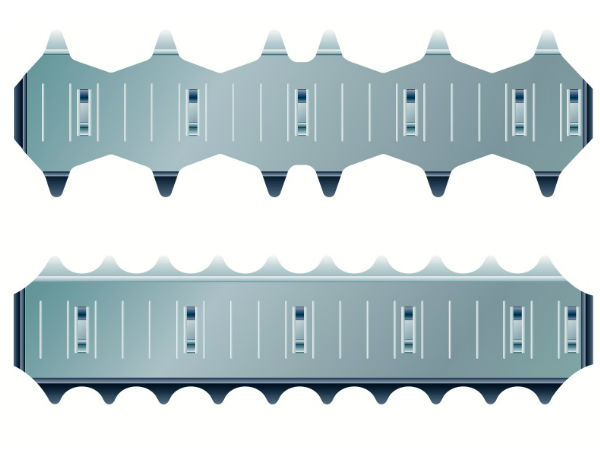 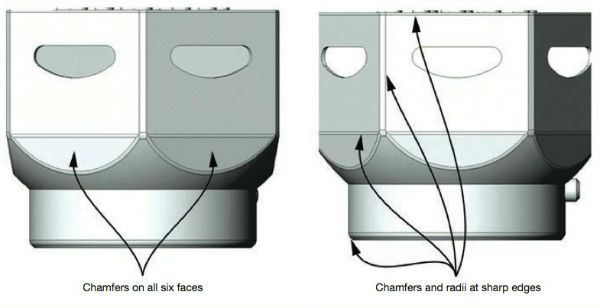 The new design, referred to as the Robust Westinghouse Fuel Assembly (RWFA), was verified by extensive mechanical and thermal-hydraulic testing; the first reload batch of this robust design was inserted in South Ukraine 3 in March 2015. This was the first reload of Westinghouse fresh fuel that had been loaded since the 2012 outages. The new assemblies were loaded with no instances of damage. The 66 WFAs already in the core continued in operation as planned.

The reload batches of WFAs for South Ukraine 2 and 3 have been carefully inspected and examined. Of these, 26 WFAs under the UNFQP have completed their planned four cycles and 36 are currently operating their fourth and last cycle in unit 3. Post-irradiation examinations of the assemblies were completed after each cycle of operation. The results were all within the Westinghouse database for healthy fuel and in line with expectations. An overall summary of the results is:

Based on the performance of the Westinghouse fuel and the company’s ability to effectively resolve the challenges that arose during the reloading of the cores in 2012, Energoatom awarded Westinghouse an extended fuel contract at the end of 2014. The contract will not only include assemblies for South Ukraine plant, but also the Zaporozhye plant.

Countries operating VVER-440 units in the EU and Ukraine have also announced a growing interest in qualifying a second supplier.
Back in 1998, BNFL (British Fuel Nuclear Limited) delivered lead test assemblies to unit 2 at Finland’s Loviisa plant. The assemblies were manufactured in the fuel facility in Springfields, UK, and the purpose of the programme was to qualify a second supplier for Loviisa, as well as for Paks in Hungary.

After successful completion of the operation of the LTAs, in December 1999 BNFL was awarded a contract to supply reload deliveries to Loviisa and a total of seven reload batches were delivered between 2001 and 2007. Shortly before the contract award, Springfields was incorporated into Westinghouse fuel operations, when BNFL acquired Westinghouse. Westinghouse decided that the reload fuel would be assembled by ENUSA in Spain instead of at Springfields.

Following some unsuccessful fuel tenders in 2006 and 2007, Westinghouse decided to exit the VVER-440 business. Lately, the increased importance of diversification of fuel supply has resulted in discussions with different utilities about re-entering the market with an upgraded Westinghouse fuel design, including more advanced materials, as well as improved mechanical features.

Euratom programme
Euratom has allocated funding to support diversification of the nuclear fuel supply for the VVER units operating within the EU. Earlier this year, a consortium of Westinghouse and eight European partners was awarded more than €2 million ($2.2 million as of 14 July 2015) by the Euratom for a programme to qualify a second supplier.

The programme will mainly focus on establishing the methods and methodology required to license a VVER-440 fuel design. The consortium includes partners with expertise and knowledge from different technical disciplines and the countries operating VVER-440 within the EU are represented (see box). As part of the programme, steps will be taken to update the design previously delivered to Loviisa, and to create a state-of-the-art design.

A significant effort has been invested to develop and qualify reliable fuel designs for the VVER plants in Eastern Europe and Ukraine. Fundamentally, the technical challenges are similar to those encountered in Western-designed light water reactors, but sometimes more difficult to foresee and overcome due to the difficulty of accessing required technical data and information.

With the increased knowledge and experience gained, Westinghouse has been able to establish a stable foundation for developing, manufacturing, and delivering competitive products to VVER utilities, which will foster diversification and thereby achieve the goal of enhanced security of fuel supply.